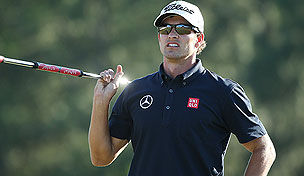 Adam Scott is back Down Under for the first time since claiming the green jacket at this week's AustralianPGA Championship, and from the sounds of things he's hungry for more majors, and possibly some home cooking.

"As long as I keep the intensity and practice and prepare I think I can win more majors, win another Masters, win the (British) Open, hopefully US Opens and PGAs.

"I'd love to win the career Grand Slam and put myself in that really small group of players who have win all four majors.

While Scott's drive to be one of the game's all-time greats probably doesn't come as a surprise to most, his first comments on the menu for next year's Masters Champions Dinner may shock a few people at first glance.

"Don't be surprised if Moreton Bay bugs are on the menu somewhere. I don't know if I'd get away with serving meat pies," he said.

Now, as much fun as it is picturing a bunch of Masters champs in their green jackets roasting insects over a campfire "Survivor" style, it turns out Moreton Bay bugs is just an unfortunate name the Aussies have given flathead lobsters.