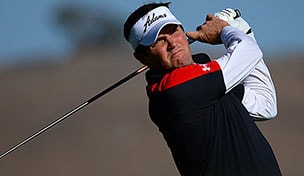 Getty Images
KIAWAH ISLAND, SC - AUGUST 06: Dustin Johnson of the United States hits a bunker shot during a practice round of the 2012 PGA Championship at the Ocean Course on August 6, 2012 in Kiawah Island, South Carolina. (Photo by Andrew Redington/Getty Images)  -

SAN MARTIN, Calif. – On one hand, Jeff  Overton has played fall events well. On the other, he’s never fared well on the West Coast.

The yin and the yang converged Thursday at CordeValle Golf Club with the yin – or maybe the yang – prevailing.

Overton shot 7-under 64, with five birdies, one eagle and no bogeys, to take the early lead at the Frys.com Open.

“It kind of feels like if you don't play well in the fall and if I'm not a good West Coast swing guy – so if I play bad now I'm probably going to play bad then. You're halfway through the season and you're way behind the eight ball,' Overton said.

You might need to read that quote a few times, but it eventually makes sense.

Overton is coming off a frustrating campaign. One in which he finished 108th in FedEx Cup points, had two top-10s, two withdrawals and one disqualification.

He also caught some flak for criticizing PGA of America officials, for their PGA Championship sponsor exemption policy, when he didn’t get into the field at Oak Hill. When asked if he had smoothed everything out with the PGA, Overton responded, 'Everything is all good.'

One adjustment he's making this season is with his grip. He said he's strengthened it, in part, to help battle tendinitis in his right wrist.

'(Strengthening his grip) allows my wrist to get a little more square at the top of my backswing without having to tweak it a little bit,' he explained. 'It tends to allow me to hit the ball more flush and allows me to cut the ball a little bit better – which just blew my mind. I don't know how. Went out there and hit a little cut shot on the last hole to a foot and just striped it all day.'

This is Overton’s ninth consecutive season on Tour and he has yet to earn a victory. His breakout season of 2010 included five top-threes and a spot on the U.S. Presidents Cup team. But not a win then, before or since.

“Obviously, a goal (this year) is to win a golf tournament, but ... the outcome of the goal doesn't happen unless you do all the other little things,' he said. 'Got beaten by a lot of low scores in the final round, and hopefully I'm a little more mentally able to shoot a little lower on Sunday to kind of win one.'