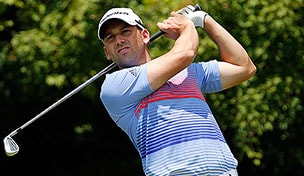 ARDMORE, Pa. – Sergio Garcia’s third round began with a “fried chicken” jeer when he was introduced on the 11th hole, and it didn’t get much better from there.

On the par-4 15th, he pumped three consecutive tee shots out of bounds on the left side, eventually carding a sextuple-bogey 10, his biggest blowup of the week, but certainly not his first. On Thursday, he hit it O.B. on Nos. 14 and 15 and managed to shoot a 3-over 73.

Take away those two holes, however, and Garcia is squarely in contention this week at the U.S. Open.

He has played the other 16 holes in 2 under.

“After that I took a chance and the round came out nicely,” he said.

Garcia maintained that the Philly fans have been “good,” but admitted that heckling was always going be a possibility this week, especially after his recent inflammatory comments about Tiger Woods.

“For the most part they’ve been very good,” he said. “Obviously there’s a little group that are trying to be funny and stand out. And they shout a little bit louder than the rest.