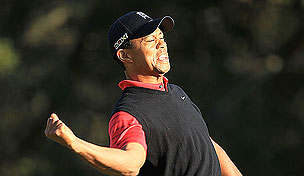 Getty Images
JEJU, SOUTH KOREA - APRIL 23: Graeme McDowell of Northern Ireland plays his tee shot on the first hole during the first round of the Ballantine's Championship at Pinx Golf Club on April 23, 2009 in Jeju, South Korea. (Photo by Stuart Franklin/Getty Images)  -

Tiger Woods won his first event in more than two years Sunday with a dramatic birdie-birdie finish at the Chevron World Challenge. But in his own event, against just 17 other players, should an asterisk be attached to his victory? GolfChannel.com senior writers Jason Sobel and Randall Mell weigh in.

Do it. I dare you. Go tell Tiger Woods that his first victory anywhere in the world in two years deserves an asterisk. You’ll likely get a glare in response that might as well read, 'Kiss my asterisk.'

Any discussion about Woods and asterisks recalls the 2008 season. As you probably remember, he won the U.S. Open that year on a broken leg, then packed it in for the rest of the campaign after undergoing surgery. In his stead, Padraig Harrington won the year’s final two majors, though it was suggested that his trophies be adorned with asterisks because he didn’t have to defeat Tiger.

That was a misguided notion, of course, since a competitor can only beat the other players in the field and has no control over those who don’t play.

Same goes for Woods’ title at the Chevron World Challenge on Sunday. It’s been suggested that since he only defeated 17 other players, this shouldn’t count as a “real” win. Well, Woods could only beat those who teed it up against him and he did just that. It shouldn’t be overlooked that those other 17 were each higher-ranked than he was entering the week, as well.

Should this win rank up there with his 14 majors? No way. Is it as impressive as a regular season PGA Tour title? Nope. It’s an offseason money-grab and should be treated as such. As the champion himself so often states, “It is what it is.” But that doesn’t mean the win should be saddled by an asterisk. It counts for exactly what it was – and that’s perfectly fine with Tiger. Just ask him.

Of course, Tiger Woods’ victory Sunday comes with an asterisk.

The Chevron World Challenge title is unofficial. It was an 18-player field competing in the silly season, a time of year when elite pros are playing for frosting and what amounts to bonus money, not for history or meaningful trophy shelf hardware.

Who wasn’t there, who Woods didn't have to beat, is notable. Europe’s best weren’t there. Luke Donald, Rory McIlroy, Lee Westwood and Martin Kaymer weren’t there. Some of the hottest PGA Tour pros of this past season weren’t there. Adam Scott, Dustin Johnson and Charl Schwartzel weren’t there. Phil Mickelson wasn't there.

There’s an asterisk for all those reasons, but that doesn't make the victory resonate less, given Woods' circumstances.

The victory will resonate more than it probably should because of all that Woods has overcome to claim it.

Yeah, Woods didn’t beat all the best players, but he finally beat back some of those demons haunting him. He beat that growing demon of doubt, maybe the toughest foe in any field he plays.

Woods might not have beaten Donald or McIlroy or Westwood, but he didn't beat himself, either. That was a big deal Sunday with Woods' re-worked Sean Foley swing holding up under pressure.

The victory will resonate because of the way Woods won, with a clutch putting stroke back on display in that birdie-birdie finish, with a proven major championship winner in Zach Johnson breathing down his neck, with Woods showing he can close, with a very difficult golf course presenting all kinds of trouble.

Yeah, this victory comes with an asterisk, but it’s a shiny little asterisk whose sparkle just might light a path to more meaningful victories in 2012.