Should Tiger have ripped Hank or let it be? 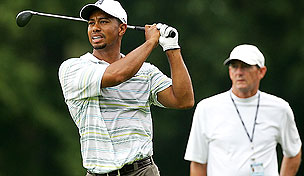 It’s not often Tiger Woods volunteers information about personal matters, but that wasn’t the case Thursday when he spoke out against former swing coach Hank Haney in a phone interview with ESPN.com. Haney’s book “The Big Miss” is due out March 27 and chronicles his time coaching Woods.

'I think it's unprofessional and very disappointing, especially because it's someone I worked with and trusted as a friend,” Woods said.

'There have been other one-sided books about me, and I think people understand that this book is about money. I'm not going to waste my time reading it.'

Woods may not agree with Haney’s decision to write the book, but should he have spoken out about his displeasure or simply left it alone? GolfChannel.com senior writers Jason Sobel and Rex Hoggard weigh in.

Simply because he’s been the world’s most polarizing athlete over the past decade and a half, simply because he’s won 14 major championships during that period, we expect Tiger Woods to speak intelligently and be opinionated on topics outside his field of expertise.

The end result is that Woods often comes off as the ultimate fence-sitter, but only because our expectations so often exceed his knowledge.

Even on matters for which he owns unique perspective – his own golf game, issues on the PGA Tour, etc. – Tiger regularly lays up rather than attacking the flagstick, offering such mundane responses as, “It is what it is,” and “It’s a process.”

It is for those answers that Woods is often criticized for not providing enough self-analysis or purveying any original thoughts.

In the case of Thursday’s comments about Hank Haney’s new book in which he writes of his time working with Woods, the golfer has finally unleashed some uninhibited rhetoric by dispensing his utter distaste for the project.

We can’t have it both ways. Can’t pile on Woods for never giving a strong opinion, then similarly criticize him when he does.

The truth is, Tiger’s right. The book is about money – just like almost every other book that has ever been published. That’s sort of the point. Doesn’t make it wrong, of course. Haney owns a viewpoint of Woods that few, if any, have enjoyed. It’s certainly well within his right to share that perspective with a public audience that is eager for details.

Just as it’s well within Woods’ right to rip his former instructor for his decision to write this book. You may not agree with his opinion, but it’s difficult to fault him for having one and airing it publicly.

Last week Hank Haney told your scribe that if Tiger Woods read his upcoming book “The Big Miss,” which chronicles his time with the game’s alpha male, he would find it “very fair and honest.”

On Thursday Woods told ESPN.com without a hint of ambiguity that he considered the idea of the tome neither fair nor honest and that he had no plans to read “Miss” when it is released prior to April’s Masters.

Haney quickly fired back, tweeting, “‘The Big Miss’ is golf history. I observed greatness and am asked about it all the time. I wanted to share it in a fair and honest way.”

Last week Haney told GolfChannel.com that he knew nothing of Woods’ serial infidelity and that “Miss” would not be a sordid tell-all. That he approached “Miss” much like Joe Torre did when he wrote “The Yankee Years,” a kind of novel of record for a historical time.

Besides, according to The Associated Press most members of “Camp Tiger” have signed a nondisclosure agreement. Haney, however, wasn’t asked to make such a commitment. To think the swing coach wouldn’t be compelled to write – and, yes, even profit – about his time with Woods is naïve, and to call him out for it only promises to increase interest in “Miss.”

There’s an old cliché that would serve Woods well when it comes to “Miss,” and the inevitable book that estranged former caddie Stevie Williams will write – the person who cares the least wins.