Should wins with anchored putters get an asterisk? 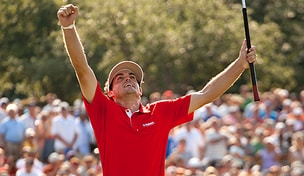 The U.S. Golf Association and R&A have proposed a ban on anchored strokes, effective Jan. 1, 2016. The stroke, most notably made with the putter, will be legal until that time. But should victories with an anchored putter attained between now and then – and even prior – come with an asterisk? GolfChannel.com writers weigh in.

Asterisks are useful grammatical tools when conveying messages such “*Void where prohibited by law,” or “*Any use of this article without GolfChannel.com’s express written consent is strictly prohibited.”

It can work for athletic achievements, too. You want to place an asterisk next to Barry Bonds’ home run record or any number of tainted collegiate national championship titles? Go right ahead.

There’s no place for it in golf, though – at least, none that I’ve seen yet. People wanted to put one next to Bob Goalby’s 1968 Masters victory when Roberto De Vicenzo signed an incorrect scorecard, but Goalby won by the rules of the game. They wanted asterisks next to each of Padraig Harrington’s major wins in 2008 because Tiger Woods was injured, but he won 'em, fair and square.

And now we’re talking about placing an asterisk next to guys who win with an anchored putter prior to it being deemed illegal? Maybe some people just don’t know their punctuation. There’s no way we should think of a victory by legal means as anything other than a victory. Keegan Bradley and Webb Simpson will wield anchored putters at this week’s World Challenge – and neither should have to apologize for it or feel ashamed about it.

Both of 'em have a pretty good chance of winning this event, too. If they do? Well, they could do a lot worse than telling people afterward: “Kiss my asterisk.”

The U.S. Golf Association and the Royal & Ancient may not make this proposed rule banning anchored putters official until 2016, but the new rule defines such strokes as improper, a determination that casts a shadow over every stroke made that way, regardless if it’s technically still legal or not. There’s a timelessness to the nature of this ruling.

If the stroke is deemed to be “improper” by golf’s governing body in 2016, it will feel “improper” tomorrow to a player who gets beat by a guy who wins with an anchored putter.

Tiger Woods is among many players who think it’s wrong to anchor a putter. Now, regardless of when the rule kicks in, they’re justified believing that their suspicions have been confirmed. Really, what's legal and what's proper are now two different questions.

There won't actually be an asterisk in the record books, but, fair or not, even the major championship victories of Keegan Bradley, Webb Simpson and Ernie Els over the last 15 months come with questions that serve as unspoken asterisks: Would they have won without anchoring their putters? Would they have won with 'proper' strokes? Would they have beaten all the players who didn’t anchor if the playing field were level? Now, you can argue the playing field was level, that any player could have anchored a putter in those majors, but if it truly is deemed an “improper stroke,” there was no level field to play upon, just a corrupted one.

Here’s a history lesson: Bobby Jones won the Grand Slam in 1930.  It remains one of the most impressive – if not the most impressive – accomplishments in golf history. He used a concave-faced wedge to win those tournaments. A year later, the USGA decided to ban the club, believing it gave players an unfair advantage.

So how do we refer to that feat now? We don’t say, Bobby Jones won the Grand Slam in 1930, but, oh, well, you know, he did use a club that was later outlawed by the governing bodies and, so, well, I guess that diminishes the accomplishment.

These players are using a type of stroke that, right now, is within the rules of the game. They aren’t cheaters. They don’t deserve an asterisk. And they have until Jan. 1, 2016 – or, hopefully, a bit sooner, so this debate doesn’t drag on for three more years – and then they must conform.

Until then, stop the bellyaching.

Perhaps more than any other sport, golf’s history is tied to equipment: hickory shafts, persimmon woods, balata balls. Despite that fact, the historical lines tend to blur between one era and the next. While we currently stand at a stark dividing point, with time the delineation between B.B. and A.B. (Before Ban and After Ban) will become less pronounced, and players who win during the upcoming interregnum should be viewed as nothing short of deserving.

Flip the situation on its head and assume the governing bodies put a temporary, three-year lift on rules against square grooves, or maximum club lengths, or drivers with spring-like effect. Wouldn’t many players use the newly amended Rules of Golf to their advantage, even if it meant playing with equipment that would knowingly be perceived as illegal years down the road? I believe they would, and likely with little hesitation if they felt their games would benefit.

The U.S. Golf Association and the Royal & Ancient have drawn a line in the sand – and that line is still years away. Until that point, golfers are charged with playing as well as they can within the confines of the current Rules. Whether or not that includes anchoring their putter may remain a talking point, but with time that point of emphasis will fade, and rightfully so. At the end of the day, as has been the case for decades, golf fans will remember the names on the trophies far more than they will recall the clubs with which those trophies were won.

Word around PGA West, site of this week’s final stage of Q-School, was that the PGA Tour may act unilaterally to ban the act of anchoring, and by definition long putters, before the U.S. Golf Association and Royal & Ancient Golf Club of St. Andrews.

This is not Camp Ponte Vedra Beach, Fla., storming the moral high ground to right a wrong, this is about perception. Although it may offend the senses, the truth is if the ban is approved next spring a victory by a long-putter using player before the January 2016 enactment would be tainted and for Tour officials that is just not acceptable.

In many ways accomplishments over the next three seasons, and 12 majors, would be viewed similarly to how history remembers the “juiced ball” era in baseball.

There are no official asterisks on Barry Bonds’ prolific accomplishments, but to the average fan there is a metaphorical cloud that will never be lifted.

Comparing the use of belly putters to PEDs is extreme, but the questions are no less valid. It may not be fair, but “anchored victories” before the 2016 transition will come complete with an asterisk, and that just won’t do.