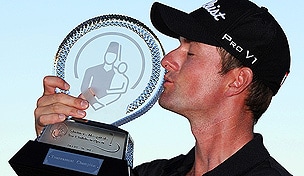 Getty Images
Keegan Bradley of the U.S. Team hits his approach shot on the fifth hole during the Day Two Foursome Matches at the Muirfield Village Golf Club on October 4, 2013 in Dublin, Ohio. (Photo by Gregory Shamus/Getty Images)  -

Webb Simpson started the day with a four-shot lead, and he cruised to his fourth-career PGA Tour title on Sunday in Las Vegas. Simpson fired a final-round 66 to win by six shots. Here’s how things ended up at the Shriners Hospitals for Children Open:

What it means: Simpson's 'major hangover' is officially cured. He had not tasted victory since his win at the 2012 U.S. Open at Olympic, but Simpson reminded everyone why he's one of the best players on the PGA Tour. While the field in Vegas was less than stellar, Simpson showed no mercy in building a four-shot lead on Friday and never letting up until the final putt dropped on Sunday.

Round(s) of the day: Jason Bohn put some pressure on Simpson with six birdies in his first 12 holes, but it was Simpson’s day and Bohn had to settle for a share of second place with Ryo Ishikawa. Ishikawa carded a 65 to walk away with a much-needed $528,000 paycheck after losing his PGA Tour playing privileges last season.

Best of the rest: Charley Hoffman, Luke Guthrie and Troy Matteson all carded 7-under 64s on Sunday to finish in the top 5. Freddie Jacobson also fired a 64 to finish T-9.

Biggest disappointment: Making only his fourth-career PGA Tour start, Chesson Hadley, who won the Web.com Tour Championship, played in the final group with his good friend Simpson. And while Hadley wasn’t expected to catch Simpson, he struggled on the front nine and never put any pressure on the leader. Fortunately for Hadley he rallied on the back nine to finish T-5 and still cashed in a nice paycheck.

Shot of the day: Just short of the green at the par-5 16th, defending champion Ryan Moore hit a low chip shot that took a few hops and rolled right into the cup for an eagle on his way to a T-9 finish.

Quote of the day: 'My husband's the best golfer ever. I wasn't nervous at all.' – Dowd Simpson, Webb's wife, after she watched her husband cruise to victory.