Simpson picks up where he left off in Vegas 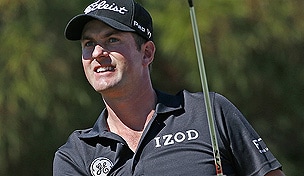 Getty Images
DUBLIN, OH - OCTOBER 03: Lindsey Vonn holds a baby squirrel as Tiger Woods of the U.S. Team looks on during the Day One Four-Ball Matches of The Presidents Cup at the Muirfield Village Golf Club on October 3, 2013 in Dublin, Ohio. (Photo by Chris Condon/PGA TOUR)  -

ST. SIMONS ISLAND, Ga. – With the PGA Tour back in the U.S. for the first time in three weeks, Webb Simpson is picking up right where he left off in Las Vegas.

A winner last month at the Shriners Hospitals for Children Open, Simpson again finds his name near the top of the leaderboard after opening the McGladrey Classic with a  5-under 65 Thursday.

“It felt good to get off to a good start, especially with how nice it is today. The wind is down, which is rare at this golf course,” noted Simpson, who sits two shots off the lead after reaching 15 of 18 greens during his opening round on the Seaside Course. “That’s about all I can do on a Thursday.”

The win at TPC Summerlin broke a mini-drought for the 28-year-old, who until last month hadn’t hoisted a trophy on the PGA Tour since the 2012 U.S. Open.

“I kind of had the opposite year last year. You know, I played good solid golf but I never got a win,” said Simpson, who had four top-five finishes during the 2013 season, including a playoff loss at the RBC Heritage. “It’s nice to go ahead and get that done early.”

Now a four-time winner on the PGA Tour, Simpson hopes to remain sharp as the 2013-14 season gets underway in earnest, though he admitted that the newest addition to his trophy collection does create a certain level of added flexibility.

“I think one thing is … I can afford to play a little less,” he added. “I think the biggest danger for someone in my position is to grow complacent and not work as hard and be as hungry. So I want to fight against that and stay as hungry as I was last year without a win.”