Simpson rises to No. 17 in OWGR after Vegas win 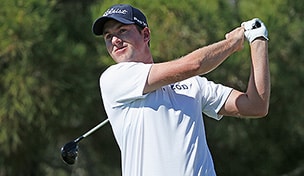 Getty Images
Hubert Green, sporting a funny hat next to Jack Nicklaus, faced serious matters in the 1977 U.S. Open. Green played the final round in Southern Hills under a death threat and still prevailed.  -

The 2012 U.S. Open champion ended his winless drought in resounding fashion Sunday, capturing the Shriners Hospitals for Children Open by a touchdown (minus the PAT).

As a result, Simpson, now a four-time PGA Tour winner, returned to the top 20 in the world rankings, moving from No. 24 to No. 17. Only 36 world-ranking points were available to the winner in Vegas, which featured just three players ranked inside the top 30.

Simpson still has work to do if he’s to finish when he ended last year, though. Last December, he was No. 11 in the world.