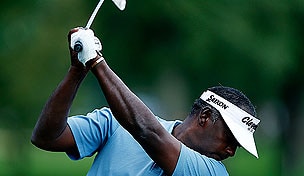 Getty Images
SINGAPORE - NOVEMBER 12: Andrew Dodt of Australia lines up for a putt on the 12th hole during the second round of the Barclays Singapore Open held at the Sentosa Golf Club on November 12, 2010 in Singapore, Singapore. (Photo by Stanley Chou/Getty Images)  -

Though he made his Champions Tour debut in September, former world No. 1 Vijay Singh is not ready to join the over-50 circuit on a full-time basis just yet.

"I played one (Champions Tour event) a couple months ago. It was different," explained Singh according to a Reuters report. "I'm not really looking forward to playing there at the moment."

Singh, who turned 50 in February, played on the Champions Tour at the Pacific Links Hawai'i Championship two months ago, tying for sixth among the 80-man field. Since then, though, he has made three starts on the PGA Tour – including a runner-up finish at the season-opening Frys.com Open – and this week is in the field for the Australian Masters.

"My game's pretty good right now. I had a pretty ordinary season last and a couple before that, with a couple operations on my knee," explained Singh, who opened Thursday with a 1-over 72 at Royal Melbourne. "This is the first year I feel like I'm able to compete again, and my game is coming around."

Singh's 2013 season was one filled with controversy, stemming from his admitted use of deer antler spray that contained the banned substance IGF-1. Originally thought to be in violation of the PGA Tour's anti-doping policy, the Fijian was ultimately cleared by the Tour after a successful appeal. With consequent litigation against the Tour still ongoing, Singh admitted that the controversy affected him during a season in which he failed to record a top-10 finish in 19 starts and missed the FedEx Cup Playoffs for the first time in his career.

"It kind of messed up my whole season, so the best thing I told myself is just focus on what I know best, which is just playing golf," he added. "The legal side will take care of itself."

After coming close to victory last month at CordeValle, the three-time major winner remains as focused as ever on winning for the 35th time before his PGA Tour career concludes.

"I think I want to win so bad, that's what's bugging me so much," said Singh, whose last win came at the 2008 Deutsche Bank Championship. "I don't want to go out there and be on the senior tour."