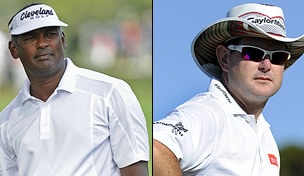 Vijay Singh and Rory Sabbatini had a verbal altercation on Saturday at the Sony Open over a slight misstep by Sabbatini's caddie, The New York Times reported.

Paired together in the third round, both players were on the first green at Waialae CC when the catalyst for the argument occurred. As Singh was lining up a 6-foot par putt, Sabbatini's caddie, Mick Doran, moved in a way which caught the Fijian’s eye. After missing the putt, Singh cursed loudly at Doran, according to The Times.

Sabbatini defended his caddie to Singh, which prompted some jawing between the two players.

“The only thing I told Vijay is whatever he was saying to my caddie is inappropriate,” Sabbatini told The Times. “I was just sticking up for my caddie, who doesn’t deserve to be talked to in that manner.”

Singh declared the matter settled on Sunday, though Sabbatini disagreed.

“I feel that Vijay definitely needs to approach my caddie and resolve the situation,” he said.

This is the second time in as many weeks that Doran has inadvertently made headlines. Accepting responsibility for a slow watch, Doran said he was the reason Sabbatini was late to his second round tee time at the Hyundai Tournament of Champions. Sabbatini was assessed a two-stroke penalty for being tardy.