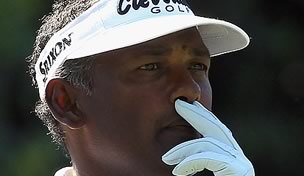 Getty Images
CROMWELL, CT - JUNE 28: David Toms reacts after missing a putt during the final round of the 2009 Travelers Championship at TPC River Highlands on June 28, 2009 in Cromwell, Connecticut. (Photo by Jim Rogash/Getty Images)  -

It appears a major streak is about to end.

Vijay Singh hasn’t missed a major championship since the 1994 U.S. Open, but he appears resigned to the fact that he won’t compete in the upcoming edition of that event, ending his consecutive major streak at 67.

The three-time major champion was entered in U.S. Open Sectional Qualifying, but decided against competing for 36 holes on Monday. He also told reporters that despite being entered in the field in Memphis, he is planning to withdraw from the field. If he competed, he could have qualified by ascending from No. 62 in the world into the top-50.

He does have one other way of getting into the field at Congressional, but it seems unlikely.

Last year, Singh received a special exemption from the USGA. While he could get another one, executive director Mike Davis has previously stated that he didn’t expect any exemptions to be granted for this year’s event.