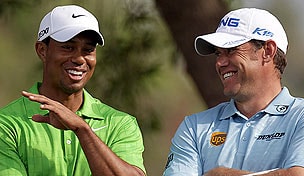 Tiger Woods moved up 31 spots in the Official World Golf Ranking with his win at the Chevron World Challenge on Sunday. His jump, however, is an example of the flawed nature of the world ranking.

Woods earned 44 points for winning at Sherwood, his biggest points haul over the rolling two-year period which determines the ranking.

The second biggest single week Woods had was in a playoff loss to Graeme McDowell in the same event. He earned 30 points in the Chevron last year - more than the 27 points he earned by finishing T-4 at the '10 Masters and U.S. Open and the 24.67 points from the T-4 at this year's Masters. A major awards 100 points to the winner.

In the 27 times Woods has teed it up, there were six times he failed to beat at least 17 players, missed two cuts, WD'd twice and finished tied for 78th at the WGC-Bridgestone Invitational last year.

The world ranking formula also works against Woods and his lack of play as it requires all points earned to be divided by a minimum of 40 events – a presumption based upon a schedule of 20 events each year.

This week, Woods averages 3.74 points per event. If his points earned were divided by the actual number of events he started, Woods would average 5.54 points. He would be ranked eighth, ahead of Jason Day.

Meanwhile, No. 3 Lee Westwood was almost No. 2 by beating 11 guys at the Nedbank Golf Challenge. His successful defense netted 38 world ranking points - the same earned by Rory McIlroy for winning the full-field UBS Hong Kong Open. Had McIlroy failed to win, he would have dropped to third.

By comparison, Westwood earned 38.4 points for losing in a playoff to Luke Donald at the BMW PGA Championship. Finishing as runner-up to Francesco Molinari at last year's WGC-HSBC Champions, the Englishman gained 40.8 points.

The weekend's results show the top-heavy nature of how the Official World Golf Ranking determines the strength of field. Perhaps an added calculation factoring in the depth of the field could smooth out how very small fields like Chevron and Nedbank are treated.