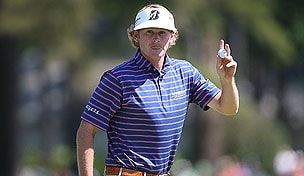 Getty Images
HILTON HEAD ISLAND, SC - APRIL 13: Brandt Snedeker waves to the crowd after making birdie on the ninth hole during the second round of the RBC Heritage presented by Boeing at Harbour Town Golf Links on April 13, 2012 in Hilton Head Island, South Carolina. (Photo by Hunter Martin/Getty Images)  -

Brandt Snedeker talks as fast as he plays golf, which is to say at nearly a breakneck pace.

With the game dealing with a pace-of-play crisis, the 2012 FedEx Cup champion said Thursday on Golf Channel’s “Morning Drive” that the current PGA Tour policy is “inept” and the only way to curb the problem is to hit players on the scorecard – not in the wallet.

Under the current system, a player can receive 10 bad times before receiving his first fine. After that 11th infraction, the fine increases.

“We’ve got guys playing for millions and you’re fining them very small amounts,” Snedeker said. “I know guys at the beginning of the year who will literally put away their allotment and know this is what I’ll get fined this year. Now I’ll go out and play the way I want to play. I don’t see how that’s going to affect anything.”

Like many before him, Snedeker thinks the only way to fix the problem is to start docking players penalty strokes.

“Those guys realize if I lose a shot on Sunday, that could be a million bucks or $500,000,” he said. “Those guys will start speeding up really quickly.

“Guys who play slow, we all know who they are. I feel like sometimes the guys get a hall pass, because they’ll say, ‘Oh, I’m working on it.’ Well, you’re not working on it really hard, because if you’re literally working on it and you’re still the slowest guy on Tour, then that says something about your work ethic, because it hasn’t changed.”

How has the pace-of-play issue affected his own game?

“It’s kind of pathetic on Tour,” he said, “because there’s no incentive to play faster. I’ve had to slow down. If not, I’m just going to have to wait longer on my next shot.” 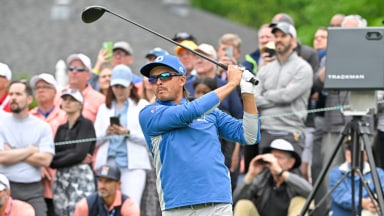