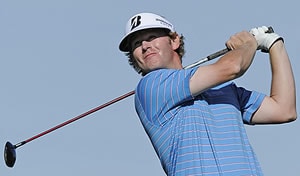 Brandt Snedeker won the Farmers Insurance Open on Sunday in a shocking finish after Kyle Stanley blew a three-shot lead on the final hole of regulation.

Snedeker, who shot a final-round 67, won with an up-and-down par on the second playoff hole at Torrey Pines.

Stanley, a long-hitting 24-year-old former All-American at Clemson who led all four rounds and took a five-shot lead into Sunday, went to the final tee with a three-shot margin, but his approach spun back off the green and rolled into the water. After a penalty drop and a pitch onto the green, he three-putted to send the tournament to a playoff, missing a 3 1/2-footer for the win.

Both players birdied the first playoff hole, a par 5. After Snedeker got up and down for par on the second extra hole, Stanley missed a 4-footer for par.