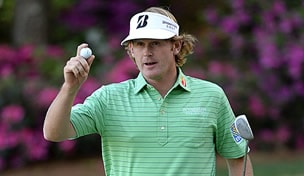 Brandt Snedeker couldn’t make it to his older brother’s Round of 64 match Monday at the U.S. Mid-Amateur.

Snedeker had a reasonable excuse, of course. A day earlier, he had helped the Americans win the Presidents Cup at Muirfield Village, and a night of celebrating left him too wiped out to board the flight to Birmingham.

So Snedeker made a promise. If his brother Haymes, who is four and a half years older, won his first-round match, Brandt would fly to see him play. Alas, Haymes lost his opener to Brad Valois, 2 and 1.

“I know he was excited to come down here,” Haymes told the USGA’s David Shefter. “It’s a shame I couldn’t win one match.”

An accomplished player in his own right, Haymes Snedeker, 37, was playing in his first USGA event since 2002, when he reached the Round of 16 at the U.S. Amateur Public Links. (A year later, Brandt won the title.) Haymes, who five years ago won Golf Channel’s Big Break X, is now a real-estate developer and part-time municipal judge in Alabama.

“His star was rising,” he said of Brandt, according to the report, “and mine had already fallen.”