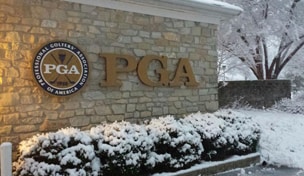 Another winter storm swept through the South Wednesday, and as a result some of the area's more notable golf courses were coated with yet another layer of snow and ice.

First up was Augusta National, which just two weeks ago fell under a blanket of snow and in 57 days will play host to the season's first major:

About 500 miles to the northwest sits Valhalla Golf Club, which will serve as the venue for the PGA Championship in August. As the photos below indicate, though, there likely won't be much golf played at the Louisville, Ky. club this weekend:

With all this snow, thought we would post some recent photos of Valhalla Golf Club, site of 2014 @PGAChampionship pic.twitter.com/Y7H4XO89Hn

@GCMorningDrive Good Morning from Louisville. Not sure if Valhalla is ready for PGA 2014 yet. #snowgolf pic.twitter.com/piaYsje2cO

But that's not all, folks. Pinehurst, playing host to both the men's and women's U.S. Opens this year, doesn't look ready for play, either.