Solheim Cup stars teeing it up this week in Canada 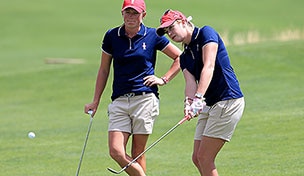 Getty Images
TURIN, ITALY - MAY 07: Marcus Higley of England plays his approach shot on the 18th hole during the first round of the BMW Italian Open at Royal Park I Roveri on May 7, 2009 near Turin, Italy. (Photo by Stuart Franklin/Getty Images)  -

If Europe’s resurgence at the Solheim Cup intrigues you, there’s good news this week.

All 12 women on the winning European Solheim Cup roster are scheduled to tee it up at the CN Canadian Women’s Open at Royal Mayfair Golf Club in Edmonton, Alberta, Canada, beginning Thursday.

The American Solheim Cup team also will be there in nearly full force with 11 players scheduled to play. Lizette Salas is the only U.S. Solheim Cup player who isn’t committed.

While 16-year-old Lydia Ko will garner much of the attention this week returning to defend her title, Europe’s 17-year-old phenom Charley Hull is sure to draw the spotlight after her remarkable introduction to American audiences at the Solheim Cup. Ko became the youngest LPGA winner claiming the title at 15 last year.

Given the emotionally charged nature of the Solheim Cup, there will be interest in seeing how Europeans respond teeing it up just four days after their historic victory. Same thing for the U.S. women, who will be looking to rebound from the profound disappointment in losing the Solheim Cup for the first time on American soil.

By GEORGE WHITE
4/18/06 -- It was one of those weekends where it was good to be young but not to be inexperienced.

4/15/06 -- Lorena Ochoa posted a 6-under 66 on Saturday to polish off a wire-to-wire victory at the LPGA Takefuji Classic.

4/14/06 -- Lorena Ochoa shot a 4-under 68 in windy conditions Friday to take a two-stroke lead over Brittany Lincicome in the Takefuji Classic.