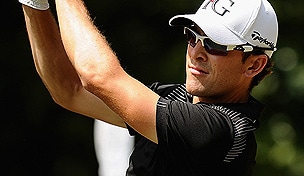 Getty Images
CHARLOTTE, NC - MAY 05: Justin Rose putts the ball on the seventh hole during the first round of the 2016 Wells Fargo Championship at Quail Hollow Club on May 5, 2016 in Charlotte, North Carolina. (Photo by Streeter Lecka/Getty Images)  -

PALM HARBOR, Fla. – In contention on the PGA Tour for just the second time in his young career, Scott Langley’s final drive of the day traveled only 169 yards after clipping a tree.

That he got up-and-down for par – “It was one for the memory banks,” he said afterward – only bolstered the 24-year-old’s belief that he’ll perform better the next time he’s in the hunt.

Langley, the 2010 NCAA individual champion out of Illinois, hung tough on a windy day at Innisbrook’s Copperhead Course. He held a share of the lead for much of the afternoon before eventually matching his career-best finish on Tour. He was solo third, two shots behind John Senden.

The biggest lesson Langley learned Sunday was how pumped up he gets under pressure. He sailed the green on both 16 and 17, the former leading to a momentum-killing bogey.

“I’m a little bummed,” he said afterward, “but this will definitely help me.”