Some Web.com grads left in the cold at Frys.com 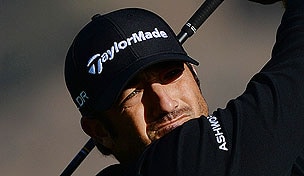 Getty Images
Win McMurry starts out simply as she begins her jaunt on the water, for Gone With The Win, with her paddleboarding guide from Charleston Stand-Up Safaris.  -

SAN MARTIN, Calif. – Alex Aragon was the first alternate into this week’s Frys.com Open as of Monday. Come Thursday morning he was still waiting.

“I had resigned myself to zero,” when asked what he thought his chances of making the field were on the first day of competition.

Around 6:45 a.m. PT, however, the Tour called and said he had a 7:50 tee time. John Merrick had withdrawn because of injury.

“I had been asking every day, ‘Has anyone heard, anyone thinking about withdrawing?’ (Officials) were like, ‘No, sorry,’” Aragon said after shooting 3-under 68 in Round 1. “Once Monday and Tuesday came and went and I didn’t get in, you just pretty much have to wait for an injury, I guess.”

Aragon last had his PGA Tour card in 2006. He finished 37th in the Web.com Tour priority ranking to gain it back, but because of his position – only 132 players are in this week’s field – he had to wait for his spot.

Tim Wilkinson, No. 38 on the priority ranking, was the second alternate to get in on Thursday, the last player in the field. That meant Nos. 39-50 had to find other means to get into the tournament or sit out. Three – Jim Renner (qualifier) and Jamie Lovemark and Kevin Tway (sponsor invites) – made it in.

Aragon was adamant that the field should have been open to 144 players.

“I think it’s just a terrible mistake (by the PGA Tour),” he said. “The way it works, people say, ‘Oh, you have your Tour card.’ It doesn’t work that way.”