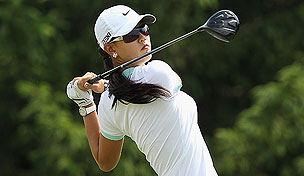 Getty Images
PITTSFORD, NY - JUNE 26: Michelle Wie of the USA acknowledges the crowd during the second round of the Wegmans LPGA at Locust Hill Country Club held on June 26, 2009 in Pittsford, New York. (Photo by Michael Cohen/Getty Images)  -

Sorenstam won the U.S. Women’s Open at The Broadmoor in 1995 and is the event’s honorary chairperson this year.

Wie, 21, is playing her eighth U.S. Women’s Open. Since tying for third at the championship in 2006, she’s missed two cuts and withdrawn once.

Here was Sorenstam’s take when asked about Wie in the media interview room:

“I would say she has not performed to her expectations or her potential. Hopefully that will come in the next - maybe this year or the next few years to follow. But she's one of those long hitters, one of those who plays with a lot of different shots in her bag. She hits some wedges just beautifully.

“I think, really, her focus, in my opinion, should be more on the golf.  She's very distracted with school, doesn't really play as much full time as I thought she would. I think she needs to come out here and compete more regularly. But, she certainly has a lot of potential.

“The physical part is there. Sometimes you wonder if she's mentally strong enough to finish at the top. She has a few victories, but has not really been able to really break through, in my opinion.

“She has a lot of experience from a lot of different tournaments. We've all seen that on the PGA [Tour], and so forth, but she’s not really come out as strong as I thought she would.”