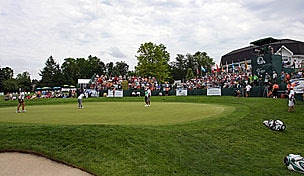 Getty Images
Brian Bateman during the third round of the AT&T Pebble Beach National Pro-Am on Spyglass Hill Golf Course in Pebble Beach, California on February 11, 2006.  -

PITTSFORD, N.Y. – For the first time in 37 years, the LPGA may not stage an event at Locust Hill Country Club next year.

The good news for long-time LPGA fans here is that Wegmans tournament officials are working to secure a more long-term future for the LPGA Championship in the Rochester, N.Y., area.

Sources familiar with discussions told GolfChannel.com Sunday that Monroe Golf Club, just 4 miles down the road from Locust Hill, is in serious talks with Wegmans tournament officials about hosting the championship next year. The other good news for LPGA fans here is that Wegmans appears to be committed to remaining a partner after operating under one-year agreements with the LPGA and Locust Hill the last two years. Wegmans’ future with the LPGA appeared doubtful going into last year’s event.

Though no contract is in place, sources say Monroe Golf Club and Wegmans tournament officials are hopeful a deal can be agreed upon over the next month. The negotiations include trying to move the Wegmans LPGA Championship dates to August next year to accommodate the U.S. Women’s Open being moved up in the LPGA schedule. Next year, the U.S. Women’s Open will be played June 19-22 as part of back-to-back major championship weeks at Pinehurst with the women playing there a week after the men. The LPGA doesn’t want to play two majors over a three-week stretch next year.

Whether Monroe Golf Club will be the long-term home of the championship is unclear. LPGA commissioner Mike Whan has quietly advocated tournament officials consider a rotation of sites to showcase Rochester’s rich golf community. Locust Hill could be part of that rotation with Oak Hill Country Club on the wish list. Oak Hill will host the PGA Championship for the third time later this summer. The club also has hosted three U.S. Opens, a U.S. Amateur, the Ryder Cup, U.S. Senior Open and Senior PGA Championship. Whether Oak Hill has any interest in being part of a rotation is unclear.

Asked about Wegmans future Sunday, Whan told GolfChannel.com that all he can report is that there’s no agreement in place with any venue to host the LPGA Championship next year.

“There is nothing contracted, but I will tell you we fully expect the LPGA Championship, together with Wegmans, will be back in Rochester,” Whan said.

Whan said Wegmans typically wants to wait until the week after the championship to talk contracts.

“There’s nothing I can foresee that is going to stop us from coming back to Rochester, but I can’t really announce anything, because there really is nothing written at this point,” Whan said. “But at this point, there’s no stumbling block.”

Monroe Golf Club is a historic Donald Ross design opened in 1924. It’s also home to the Monroe Invitational, a prestigious men’s amateur event dating back to 1937. Dustin Johnson, Erik Compton, Chris DiMarco and George Burns are among past winners.

Locust Hill has been host to an LPGA event since 1977. It became a major in 2010. Pat Bradley won the inaugural Wegmans Championship with Nancy Lopez winning the second event in ’78. Some of the greatest names in women’s golf have won at Locust Hill including Sandra Haynie, Kathy Whitworth, Patty Sheehan, Karrie Webb, Meg Mallon and Lorena Ochoa.

LPGA pros have developed strong ties with this community over the years and should embrace news this event will remain in the area.

“We love Rochester,” Christina Kim said. “It would be hugely important to the LPGA to keep this event.”

In her 11 years in the LPGA, Kim has never missed playing Wegmans.

“It would be devastating to leave here,” Kim said. “It is such a special place. They’ve treated this place as a major since day one. I can’t fathom not being here.”

Morgan Pressel has stayed with the same host family for several years.