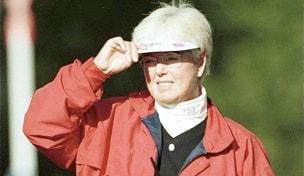 ROCHESTER, N.Y. – Hall of Famer Pat Bradley made a getaway from the LPGA Championship Thursday night to deliver a hug.

She left for the Travelers Championship to see her nephew, Keegan Bradley, play in Cromwell, Conn.

Bradley said she “went through the roof” watching Keegan win his first PGA Tour event (HP Byron Nelson Championship) last month, and though she’s spoken to him by telephone a few times since his breakthrough victory, she’s yet to see him.

Bradley's titles include the ’86 LPGA Championship.

“That’s the year Keegan was born,” Bradley said. “It was a special year.”

That’s the year Bradley won three of the year’s four women’s major championships. She won all but the U.S. Women’s Open, tying for fifth.

Keegan is son to Pat’s younger brother, Mark. Pat’s plan was to bring a special guest with her to see Keegan at the Travelers on Friday. She intends to bring her 87-year-old mother, Keegan’s grandmother.