Spieth embarrassed with behavior during loss to Els 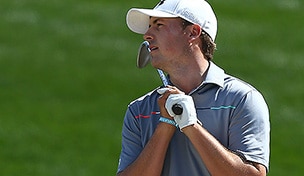 Throughout his quarterfinal match against Ernie Els on Saturday at the WGC-Accenture Match Play Championship the 2013 PGA Tour Rookie of the Year appeared out of sorts and aggravated with his play.

So much so that even Els took notice, if not advantage.

“I could almost sense the frustration in Jordan today that he wasn't quite playing the way he did yesterday,” said Els, who won the match, 4 and 2. “I was kind of playing on that a little bit, just making sure if I was missing a shot that I made sure that I got it up and down to keep him at bay or keep him frustrated.”

After the round Spieth seemed even more disappointed with his attitude and behavior following what had otherwise been a solid week.

“I didn’t have my swing, but I was a little mental midget out there. Actually kind of embarrassing looking back,” Spieth said. “I was dropping clubs and kind of just whining ... and you just can’t do that. In match play you’ve got to keep your cool. Anytime you show that, it’s weakness.”

Speith later tweeted, “I’m embarrassed about the way I acted on the course today. Played like the 13 year old version of myself mentally.”