Spieth hasn't been subjected to rookie hazing ... 'yet' 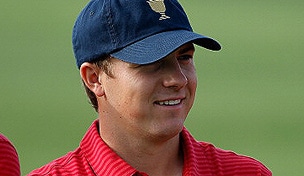 Getty Images
Mike Perez won the Big Break title at the house of the mouse. Watch the full season <a href='http://www.golfchannel.com/tv/big-break-disney-golf/'> HERE </a>  -

DUBLIN, Ohio – Two weeks ago at the Tour Championship, Jordan Spieth suspected that he’d be subjected to some rookie hazing at the Presidents Cup.

Much to his surprise, it hasn’t happened.

The 20-year-old captain’s pick is the only United States team member who has never competed on a previous Ryder or Presidents Cup team, but that hasn’t drawn the attention of his teammates.

He has an explanation for why it hasn’t happened.

“I think we've been so busy and I think a lot of the guys are at dinners or with their wives,” he continued. “They don't want to go overboard.”