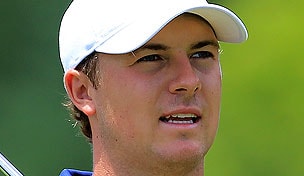 DUBLIN, Ohio – Wonder-rookie Jordan Spieth didn’t wait for Thursday’s opening matches at the Presidents Cup to impress, but then he’s been doing that all season.

The 20-year-old ignited the crowd, not to mention his American teammates, when he hit a “smooth 7-iron” during a practice round early Wednesday at Muirfield Village that bounced once and eventually found the bottom of the cup at the par-3 12th hole.

The only bad news? The ace did little to help him and fourball partner Steve Stricker in their match against Tiger Woods and Matt Kuchar.

The group played two six-hole matches, an alternate-shot match and a best-ball match, and Spieth and Stricker – who will play Ernie Els and Brendon De Jonge in Thursday’s opening session – lost them both.