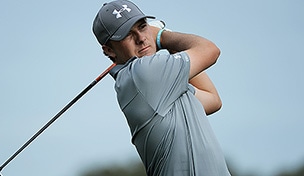 Getty Images
Karrie Webb of Australia reacts after a putt on the first hole during day four of the LPGA Australian Open at Royal Melbourne Golf Course on February 22, 2015 in Melbourne, Australia.  -

Spieth doesn’t know how or when he injured his ankle during his second round at Torrey Pines – when he shot 63 and grabbed the 36-hole lead – but he admitted Sunday that the ankle was “pretty messed up.” On the weekend he had his ankle taped and in a modified splint.

Said Spieth on Sunday, “I felt it on the second day on the back nine and I guess from there, I just stopped loading as well on it and I started missing fairways.”

Spieth’s agent, Jay Danzi of Lagardere Unlimited, said that the 20-year-old has “improved significantly” and expects to play in next week’s event. Last year, Spieth tied for 22nd at Pebble in his second start as a pro.

The 2013 PGA Tour Rookie of Year has enjoyed a solid start to his sophomore campaign, finishing runner-up at Kapalua and holding the solo 36-hole lead at Torrey Pines before a 75-75 weekend dropped him to T-19.