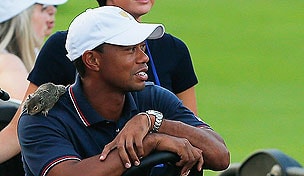 DUBLIN, Ohio – Davis Love Jr., the father of U.S. President Cup assistant captain Davis III, would pick up sticks while he watched his son play golf for good luck. On Thursday at Muirfield Village Love went with something a little more lively.

As the Day 1 matches got underway Love ran across a baby squirrel on the second hole and was worried, “it was going to get run over.”  Love picked up the squirrel and it quickly became the U.S. team’s good luck charm. Or maybe its mascot.

Love & Co. named the squirrel Sammy, “because we didn’t know if it was a boy or a girl,” and at one point Sammy was spotted resting on Tiger Woods’ shoulder. “Lindsey (Vonn) loves him,” Love said.

Love joked that he was going to take Sammy to the Columbus Zoo and give him to Jack Hanna, but it seems U.S. captain Fred Couples wants to keep him around for a little while longer.

“Freddie (Couples) wanted me to bring him to the press center but Sammy has already gotten enough press today,” Love smiled.

For more pictures of the furry little guy (the squirrel, not Woods), click HERE or on the photo below.