Stanley looks to build on hot start at Farmers 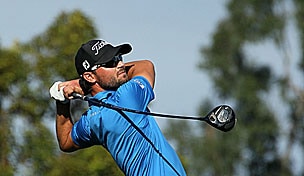 Kyle Stanley enters the third round of the Farmers Insurance Open with a one-shot lead over Brandt Snedeker, as well as his second crack at handling a 36-hole lead on the PGA Tour.

In his rookie campaign in 2011, Stanley had the lead at the halfway mark of the Honda Classic, only to fade to a T-24 by Sunday evening after going 74-75 on the weekend in difficult scoring conditions. By comparison, Stanley had no problem negotiating the two tracks at Torrey Pines. His 130 for two rounds is his best on the PGA Tour by two shots over his 132 at the John Deere Classic last year. The two-round total was also one shot shy of tying the tournament mark, set by Tom Lehman (2005) and Lennie Clements (1996).

Stanleys closest pursuer is Brandt Snedeker, who is a dynamo at Torrey Pines. Snedeker has fired 10 consecutive under-par rounds at the Torrey twin courses and has been in the top 10 here in each of the last two years. Off to a hot start after hip surgery in the offseason, Snedeker is T-2 very early in the year in third-round scoring average. Last year, he was T-33.

The pair of challengers behind Snedeker offer a contrast in experience.

Martin Flores is making just his 31st career PGA Tour start and second start in this event. A high finish, however, could set up Flores for an outstanding season. Graduating from the Nationwide Tour at No. 24 on its money list, Flores will need big bucks to improve his position in the tours first reshuffle for Nationwide and Qualifying School graduates. A better priority will land him more starts at better events.

Sang-Moon Bae would make history if he went on to hoist the trophy this weekend. He would become the first player since Arnold Palmer in 1957 to win this event in his first try. Bae is not unproven, winning the Japanese tour order of merit last season with three victories. He is 34th in the Official World Golf Ranking.

The problem facing all of the contenders except for Snedeker, however, is that Torrey tends to produce veterans as champions. The Farmers Insurance Open has not crowned a first-time PGA Tour winner since Jay Don Blakes victory in 1991.