Stanley in for Match Play; Daly up 235 spots 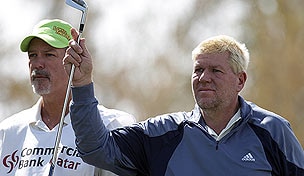 After overcoming an eight-shot deficit to take the Waste Management Phoenix Open on Sunday, Kyle Stanley is now No. 52 in the Official World Golf Ranking.

Stanley improved 35 spots in the ranking with his win at TPC Scottsdale, securing a spot in the WGC-Accenture Match Play, as well as a ticket to the Masters. The Clemson product began the year at 184th in the ranking, but in the last two weeks, has improved 98 places.

While Spencer Levin tied the PGA Tour record for the biggest 54-hole collapse, he did move up 20 spots to No. 72.

Qatar Masters champion Paul Lawrie jumped into the world top 50 for the first time since July 2003. Lawrie improved 31 places to No. 47 in the ranking. The 1999 Open champion is in position to make the Masters by finishing in the top 50 on the ladder.

Finishing fourth in Qatar, John Daly notched his best result since the 2009 Italian Open. He also rocketed up the world ranking, to No. 309 – an increase of 234 spots.

Tiger Woods, who will make his 2012 PGA Tour season debut this week at Pebble Beach, dropped one spot to No. 18.