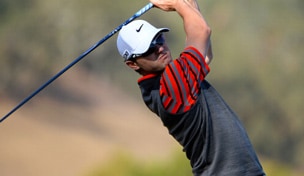 Getty Images
KIAWAH ISLAND, SC - AUGUST 06: Rory McIlroy of Northern Ireland hits a bunker shot during a practice round of the 2012 PGA Championship at the Ocean Course on August 6, 2012 in Kiawah Island, South Carolina. (Photo by Ross Kinnaird/Getty Images)  -

SAN MARTIN, Calif. – Kyle Stanley said he “scared the hole” during his front nine Thursday at the Frys.com Open. The back nine took notice.

“Most of the front nine I couldn’t really get them to drop,” Stanley said. “(On) the back nine I just continued to keep hitting greens, give myself good looks, and was able to make a couple.”

“A couple” included three birdies and an eagle at the par-5 15th.

Stanley is making his first start in over month, after missing the cut in six of his final nine events. He said he took about three weeks off and recharged his batteries.

“I think the difference is I feel mentally pretty refreshed and ready to go,” he said. “I knew it could take that long to get some of the physical aspects of my game back, but mentally I feel good. I’m excited to play golf. I think that’s a good thing.”