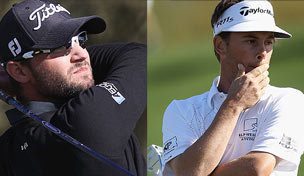 A week after ceding a seven-shot lead late last Sunday to eventually lose the Farmers Insurance Open in a heartbreaking playoff, Kyle Stanley picked up his first PGA Tour win at the Waste Management Phoenix Open.

Stanley carded a final-round 6-under 65 to finish on 15 under and one shot better than Ben Crane, whose 66 left him just shy of tying the eventual winner.

Spencer Levin entered the final round with a six-shot lead, but four bogeys and a double bogey at the 15th hole were the driving force behind a final round of 4-over 75. Levin tied a dubious PGA Tour record in the process, becoming the sixth player to lose a tournament after holding a lead of six shots with 18 holes to go. The last player to do so was Sergio Garcia at the 2005 Wells Fargo Championship.

D.J. Trahan finished in solo fourth on 12 under.