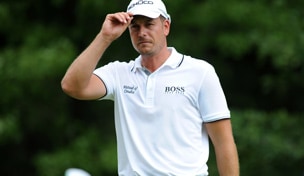 Getty Images
AUGUSTA, GA - APRIL 05: Miguel Angel Jimenez (L) and Jose Maria Olazabal of Spain walk together during a practice round prior to the 2011 Masters Tournament at Augusta National Golf Club on April 5, 2011 in Augusta, Georgia. (Photo by Jamie Squire/Getty Images)  -

Henrik Stenson’s bid for a rare end-of-season double dip might take a hit this week at the BMW Masters.

Stenson arrived in China with a swollen right wrist and forearm and is unsure if he will be able to tee it up in the European Tour’s Final Series opener. The world No. 4 is scheduled for an MRI on Tuesday to determine the extent of the injury.

Stenson told reporters that he injured his right arm last week while practicing at his home in Lake Nona. He hasn’t played since he won the Tour Championship and captured the $10 million FedEx Cup bonus. During the playoffs, he was dealing with tendinitis in his left wrist.

“I am hoping to get it sorted out over the next couple of days,” he told reporters, “but at the moment I’m not in great shape and I’m not certain of playing this week here in Shanghai.”

Stenson said his wrist got “worst and worse” on the long flight and didn’t hit any balls Monday. He is taking anti-inflammatories and icing regularly.

Stenson is the leader in the season-long Race to Dubai, but his 425,573-euro advantage ($581,758) could disappear quickly in the big-money, end-of-season series.

“It’s very worrying,” he told reporters, “especially as this will be the first week of a seven-tournament stretch for me, so it’s not the best scenario to be having a wrist problem.”