Stenson remains ahead of challengers in RTD 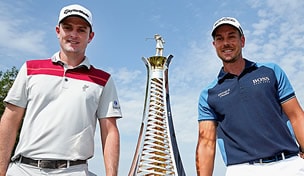 A sloppy three-putt bogey at the last Thursday soured what was an otherwise encouraging day for Henrik Stenson as he tries to become the first player to capture both the FedEx Cup and Race to Dubai in the same season.

The good news: He shot a 4-under 68 to sit just two shots off the lead at the season-ending DP World Tour Championship in Dubai.

Even better news: He’s still ahead of the other challengers in the Race to Dubai.

“It’s frustrating to drop one there,” he said afterward, “but it was a good first round. I’m playing good, so there’s nothing to be worried about the game.”

Stenson is one of three players who control their own destiny and can capture the season-long race with a victory at Jumeirah Golf Estates. The other two players, Justin Rose (2-under 70) and Graeme McDowell (72), got off to uneven starts Thursday.

The top nine players in the standings all have a mathematical chance to win the Race to Dubai, but the latter six need help.

Jamie Donaldson is No. 5 in the standings and opened with the best score of any of the other contenders, sitting joint fourth with Stenson at 68.

Thongchai Jaidee, who entered the week at No. 7, and No. 4 Ian Poulter both shot 69.

To have any chance of overtaking Stenson, Poulter needs third or better, Donaldson needs second or better, and Jaidee must win.

“I’m walking away frustrated from today’s round but happy to be only three behind,” Poulter said. “I’m playing as good as I’ve ever played, I think. I’m feeling as confident as I ever have. I’m probably swinging it the best I ever have. So it’s a good mix.”