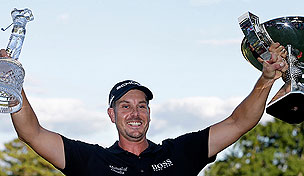 Having spent much of the day on cruise control, Henrik Stenson played steady on the last four holes to secure a three-stroke, wire-to-wire victory at the Tour Championship and capture the FedEx Cup. Here’s the skinny on the final day at East Lake:

What it means: It’s a life-changing victory for Stenson, who in the past month matched his previous victory total (two) on the PGA Tour. With wins at the Deutsche Bank Championship and now the Tour Championship, the 37-year-old completed a remarkable career turnaround with a $10 million bonus. The Swede also is expected to move to No. 4 in the world rankings, his highest position since 2009. At this time last year, he was No. 117 in the world. He also became the first European player to win the FedEx Cup.

Round of the day: Spieth made seven birdies, including four in a row on Nos. 13-16, to pull within a shot of the lead. But his improbable charge came to an end on the 17th, when he caught his approach heavy and drew a buried lie in the greenside bunker, leading to a bogey. The closing 64 was still a fitting end to a remarkable freshman campaign for Spieth, 20, who became the first player since Tiger Woods (1996) to begin the year with no status and advance to the Tour Championship. He had nine top 10s this season and, including FedEx Cup bonus money, about $5 million in earnings.

Best of the rest: Stricker eagled the par-5 15th to pull within two shots of the lead, but he wasn’t able to apply any more pressure. He closed with 65. It was an even better finish for Webb Simpson, whose final-round 7-under 63 was the best round of the day and vaulted him into solo fourth.

Biggest disappointment: Tiger Woods shot 67 Sunday but still finished only in a tie for 22nd. It was a thoroughly disappointing playoff run for Woods, who after a T-2 at the opener failed to finish inside the top 10 in the next three limited-field events. The No. 1 seed entering the Tour Championship has failed to win the last four FedEx Cup titles.

Shot of the day: With Spieth and Stricker making a late push for the FedEx Cup title, Stenson’s last scary shot of the day was his approach on the par-4 17th. His fairway-bunker shot came out perfect and finished about 20 feet right of the hole. “I’ve lived in Dubai,” he said, “so I’m good out of the sand, obviously.”

Quote of the day: “I managed to come out of bad slumps twice, and it just shows to hang in there and try your best and good things will come your way eventually” – Stenson