Still plenty of golf left to be played at Muirfield 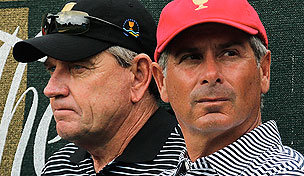 DUBLIN, Ohio – After two days at the Presidents Cup, there are a handful of things we’ve learned so far.

A baby squirrel can indeed rest comfortably inside the pants pocket of an assistant captain.

Tiger Woods’ teammates see him as more of a Carlton Banks than a Fresh Prince.

What we haven’t learned is anything that will definitively determine the outcome of this event. With only two of six matches completed from Friday’s foursomes session after a lengthy weather delay, the United States leads the International side by a 4½ to 3½ margin.

There’s still plenty of golf left to be played, but simply claiming that is too obvious. So instead, we hit the calculator to determine just how much golf remains.

There are eight points on the board of a total 34. That means 76.5 percent of all available points – if no sessions are shortened or altered because of the delays – will be awarded this weekend.

To further this point, let’s compare it to a football game.

With only 23.5 percent of the competition played already, that would be the equivalent of 53 seconds remaining in the first quarter.

Prefer baseball? We’re in the mathematical equivalent of the top of the third inning.

So yeah, like we said: There’s plenty of golf left to be played.