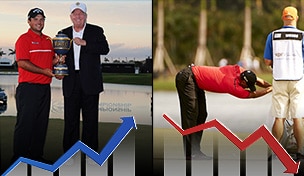 Getty Images
AUGUSTA, GEORGIA - APRIL 05: Rory McIlroy of Northern Ireland plays his shot from the sixth tee during a practice round prior to the start of the 2016 Masters Tournament at Augusta National Golf Club on April 5, 2016 in Augusta, Georgia. (Photo by Andrew Redington/Getty Images)
-

P-Reed (+10%): Love his bravado – in both his choice of Sunday attire and his post-round interview – and there is no arguing this indisputable fact: The only players who have won at least three times on the PGA Tour before their 24th birthday are Tiger, Phil, Sergio, Rory … and Patrick Reed.

Inbee (+7%): After a series of close calls, she slammed the door on No. 2 Suzann Pettersen in China and showed she’s not yet willing to cede the No. 1 ranking.

Big bombers (+5%): Bubba has four consecutive top 10s (including two runners-up), while DJ has finished inside the top 6 in each of his last six stroke-play events on Tour. Hope they’re scouting Augusta National as I type this.

Chesson Hadley (+3%): The former Georgia Tech standout already looked like the best player among the rookie crop. Now he gets to enjoy two years of stress-free living.

The ‘S’ word (+1%): “Thank you, Henrik Stenson, world-class ball-striker, for showing that ghastly hosel-rockets are not just the ills of common folks.” – Every recreational golfer, everywhere.

Alabama men’s golf (-1%): The defending NCAA champion Tide’s 11-event win streak came to a surprising end – thanks to Houston, of all teams – and then they finished a distant fourth in the strongest regular-season event of the season. Hey, at least they got to visit the White House on Monday.

Jim Furyk (-2%): Didn’t know it was possible for this short-and-straight knocker to shoot a four-round score of 18 over par. That’s some seriously bad mojo heading into the Tour’s Tampa stop, where he has four consecutive top 15s.

Tiger’s back (-5%): The good news: Tiger completed all 72 holes in a PGA Tour event. The bad news: At Doral his back pain seemed markedly worse than during his Honda WD. Wonder if “back spasms” is putting it too lightly.

Hideki (-6%): Talented player, but he was blasted on Twitter by Ian Poulter – who, it should be noted, has 1.6 million followers – for “burying” his putter near the cup. Veteran move – everyone knows a public scolding is the most effective.

The WGC-Trump Championship at Trump National Doral presented by Donald Trump (-7%): The Trump-ordered redo looks better on TV, involves more strategy and is generally more interesting, but The Donald’s desire for an even-par winning score was ridiculous, even by his standards. The course should be better in 2015 – assuming, of course, that architect Gil Hanse has a say in the changes.