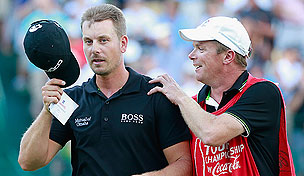 ATLANTA – Before Round 2 at the Tour Championship, Henrik Stenson caved the face of his 4-wood in while warming up for his round. That night, his caddie Gareth Bryn Lord set about finding a replacement for the 17-degree Callaway X Hot club.

Lord was staying with a friend from college who is a club pro at a local club, Ashton Hills, and asked his friend if he had any replacement heads. He did not, but had a member, James Anderson, who was using one.

Stenson put the club, which was fixed onto his old shaft, in play on Saturday and Sunday on his way to victory and the $10 million FedEx Cup.

“It actually seems to be better than the first one,” Lord smiled.

In 2010, Jim Furyk won the Tour Championship and FedEx Cup with a used putter he’d purchased two weeks earlier at the Deutsche Bank Championship for $39. When reminded of this, Lord smiled, “This one was free. Actually, we stole it.”

Stenson said he gave Anderson a new 3-wood that Callaway had shipped to him and plans to also send him a new 4-wood to replace the one he, well, appropriated.