Stricker back inside top 5 of OWGR; Tiger 25th 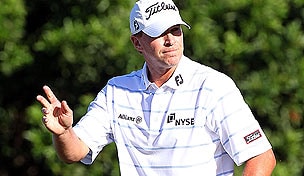 Getty Images
HONG KONG, CHINA - NOVEMBER 23: Lin Wen - Tang of Taiwan plays his tee shot on the third hole during the final round of the UBS Hong Kong Open at the Hong Kong Golf Club on November 23, 2008 in Fanling, Hong Kong. (Photo by Stuart Franklin/Getty Images)  -

After his 12th career PGA Tour win at the Hyundai Tournament of Champions on Monday, Steve Stricker is back in the top 5 in the Official World Golf Ranking.

The victory at Kapalua allowed Stricker to move up a spot, surpassing Adam Scott, who was not part of the field at the winners-only event. Due to the smallest field since the move to Kapalua in 1999, Stricker earned the fewest points in the last five years of the event.

Runner-up Martin Laird moved up 14 spots, landing at No. 33. Webb Simpson moved up from 10th to seventh, just behind Scott.

Following a successful defense of his Africa Open title, Louis Oosthuizen improved 14 spots to No. 26. Notching his second straight top-10 finish in his home country, Retief Goosen snuck back into the top 50 at No. 50.

The top four in the ranking remains unchanged with No. 1 Luke Donald leading, followed by Lee Westwood, Rory McIlroy and Martin Kaymer.

Tiger Woods dropped two spots to No. 25. He will begin his 2012 season in two weeks at the Abu Dhabi HSBC Championship.