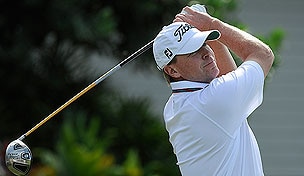 Steve Stricker entered the final round of the Hyundai Tournament of Champions with a five-shot advantage in search of his 12th PGA Tour win. Fighting a couple of early charges and personal struggles with the putter, the Wisconsin native emerged victorious in a three-shot win over Martin Laird.

Missed putts at the fifth and sixth hole left Stricker at 1 over on the day, inviting the trio who started the day in a tie for second back into the tournament. On the back nine, however, Stricker shut the door with four birdies en route to a second consecutive 4-under 69 at Kapalua.

The Players champion K.J. Choi surged up the leaderboard on Sunday, shooting 65 to finish alone in fifth.

Choi’s round was matched by PGA champion Keegan Bradley, whose bogey-free performance was his second of the week. Bradley finished 16th in the 27-man field.

With the win, Stricker has his eighth PGA Tour victory since 2009. He also moves a spot to No. 5 in the Official World Golf Ranking.