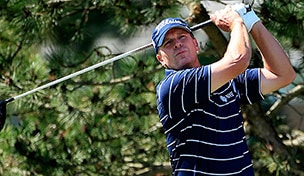 This latest incident, which occurred Friday at the BMW Championship, could not only affect this tournament but also the $10 million FedEx Cup.

Tiger Woods is still in position to win the third leg of the playoffs, but he’ll have to erase a four-shot deficit in the final round. He shot 66 Saturday, a day after being assessed a two-shot penalty when a rules official determined that his ball moved behind the first green.

“I looked (at the replay),” said BMW leader Jim Furyk, “and I didn’t realize that ball moved. It was so minute, it was probably tough to pick up.”

Not tough enough to slap Woods with a two-shot penalty, however. Even after Woods had a “very good discussion” with Tour rules official Slugger White, the ruling was upheld.

When asked whether it seemed unusual that the rules official and player had differing opinions, and that the ruling didn’t err on the side of the player, Woods said, “I don’t know, but I went from five back to seven back real quick.”

“The rules are tough,” Steve Stricker said, “and there’s always a fine line between oscillating and moving. A player can see it as one thing and the camera is going to obviously pick it up differently. … It’s unfortunate that he’s been at the center of this about three times this year. I don’t know why, if it’s just because all the TV is on him or what.”

That would seem one of the likely reasons, as Woods’ under-the-microscope career is even more scrutinized with the advent of high-definition cameras. In Abu Dhabi and Augusta, Woods admits that he made the improper call. That wasn’t the case this time.

Said Furyk, “The scrutiny that he’s on television, and every step, every little thing he does is not only watched but then everyone has to weigh in on whether it was good or not. I thank the Lord that I don’t have to live that way on a daily basis.”