Stricker gets his revenge with U.S. victory 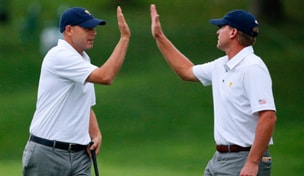 DUBLIN, Ohio – Steve Stricker thought that stinging Ryder Cup loss at Medinah a year ago might be the last American international team he made.

In the wake of that defeat, he sounded like a man who couldn’t see himself playing in another. He took the loss hard, losing the clinching match to Europe’s Martin Kaymer in a week where he didn’t have his best form.

But making this Presidents Cup team, helping the Americans win with a 3-2 record for the week, he sounded like a man who isn’t ruling out the possibility of making yet another Ryder Cup team next year.

Stricker will be 47 when the Americans go to Gleneagles to meet the Europeans again, but he said he feels good about where his game is at and how well he responded to a more limited schedule this year.

“It was good for us to bounce back as a team after last year’s tough loss,” Stricker said. “It gives us confidence going forward next year. I think that’s important.”

In just 13 starts this year, Stricker finished third in the FedEx Cup playoffs and seventh on the PGA Tour money list. While he isn’t ruling out the possibility of making another Ryder Cup team, don’t expect him to ramp up his scheduled to do so. He’s planning to play 13 events again next year.