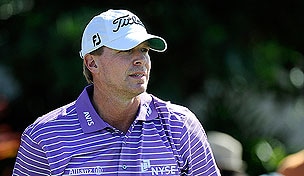 Standing on the 15th tee with a lead that had dwindled to one shot, Steve Stricker made four consecutive birdies to close the third round of the Hyundai Tournament of Champions. The closing quartet of birdies left Stricker five clear of a trio of players – the same advantage as when he began the day.

Stricker carded 4-under 69 to reach 19 under through 54 holes, including a chip-in at the 16th hole to set up a simple birdie at the closing par 5 on the Plantation Course.

The final five holes at Kapalua have been where Stricker has done the most damage. Through three rounds, the Wisconsin native is 13 under on the stretch.

Webb Simpson, Martin Laird and defending champion Jonathan Byrd are all on 14 under par. Laird and Byrd each shot 67, while Simpson matched Stricker in their two-ball.

The round of the day belonged to Memphis winner Harrison Frazar, whose 7-under 66 has him in solo seventh.

Frys.com Open winner Bryce Molder took his first PGA Tour title after 130 winless starts last fall. After a 67 on Sunday, Molder is in position to make  run at his second win in his last three starts. He is tied for fifth on 11 under with Kevin Na, whose 71 was a letdown from the red-hot 29 on the back nine on Saturday.