Sunday roundup: Na back from injury in big way 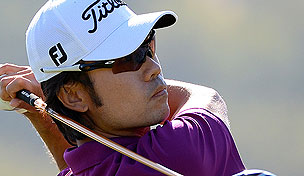 SAN MARTIN, Calif. – Welcome back, Kevin Na. Playing in his first event since the Masters because of a back injury, Na tied for third at the Frys.com Open.

After opening in 75, Na shot 67-64-64 to reach 14 under. He was two strokes off the lead when he finished play but finished three back of winner Jimmy Walker.

“I shot 4 over the first day and it wasn’t looking too good to make the cut,” Na said. “Played awesome the second day and survived the cut. … And, you know, I just tore it up on the weekend. Just absolutely tore it up.”

Na said he spent two and a half months in Korea rehabbing his back – “acupuncture, chiropractic, physical therapy, and rehab all in one spot.” He then eased his way back into competition.

Na will play next week’s Shriners Hospitals Open in Las Vegas, where he lives and won in 2011.

Here’s a Sunday roundup of other side stories from the final round at CordeValle Golf Club.

• Scott Brown recorded his first top-10 on Tour since winning the Puerto Rico Open in March. He entered this week having missed nine of 19 cuts since his opposite-field victory, but closed in 64 for a T-3.

• Following a Saturday 77 that knocked him out of contention, Camilo Villeges shot 6-under 65 on a pressure-free Sunday to tie for 26th.

• Billy Hurley, a Web.com Tour graduate, will compete next week in Las Vegas after tying for ninth at the Frys.com. He was third alternate.

• Andres Gonzales was in the Frys.com Open field based on a top-10 finish at the Wyndham Championship, the final event before the 2013 FedEx Cup playoffs. He just missed qualifying for next week’s event via the same route. Gonzales, who failed to earn his PGA Tour card for this season on the final hole at Web.com Tour Finals, played his back nine in even par for a 69 to finish two shots outside the top 10.