Taking stock for Ryder Cup: Who's up, who's down 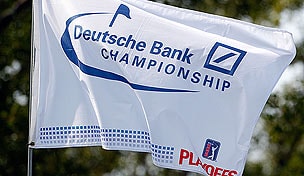 NORTON, Mass. – The Deutsche Bank Championship represents the last event for players to audition for a spot on the U.S. Ryder Cup team. Captain Davis Love III will announce his four wild-card selections on Tuesday, a day after the final round at TPC Boston.

As of now, it appears as though there are seven players vying for the final four spots. After each round, we’ll break down the contenders and see what they need to do to capture the captain’s attention.

Dustin Johnson (67): Made a bold-faced statement Friday, shooting a 4-under 67 and outclassing Ryder Cupper Bubba Watson by eight shots. Johnson is coming off a T-3 at the Barclays, and another strong weekend at TPC Boston could be enough to clinch a spot on the team.

Hunter Mahan (68): Had to play well at the Deutsche Bank after missing the cut at last week’s Barclays. It’s been a struggle recently for Mahan, already a two-time winner this season, as he’s posted just one top-10 finish since April. The opening 68, though, was his best start to an event since February.

Jim Furyk (69): Perhaps the most hotly debated candidate, as he has plenty of Ryder Cup experience but is the only one of the contenders who has not recorded avictory this season. After double-bogeying the last hole to lose at the WGC-Bridgestone Invitational, Furyk has a T-42 and MC in his past two starts, respectively.

Brandt Snedeker (69): Didn’t receive a whole lot of attention Friday with one of his playing competitors, Tiger Woods, garnering all of the early headlines after an opening 64. But Snedeker’s three-birdie, two-bogey start shouldn’t go completely unnoticed. Another good round Saturday should allow him to build on his runner-up finish a week ago at The Barclays.

Steve Stricker (69): Considered a lock by many because of his formidable partnership with Woods, Stricker got off to a steady, if unspectacular, start at TPC Boston, recording three birdies against only one bogey. Before last week’s T-54 at Bethpage Black, he hadn’t finished outside the top 25 in an event since early June.

Rickie Fowler (71): The wildly popular player got off to a horrible start at TPC Boston, going double bogey-bogey, but came home in 33. His even-par start currently has him in a tie for 56th, and the Quail Hollow winner hasn’t finished inside the top 20 since the Colonial in May.

Nick Watney (72): Last week’s winner is the only contender who shot over par on Friday, mostly the product of a schizophrenic second nine in which he recorded three bogeys, a birdie and an eagle in a five-hole stretch. He wasn’t even considered for a captain’s pick before the playoffs began, and likely needs to finish inside the top 5, if not better, to draw serious consideration.