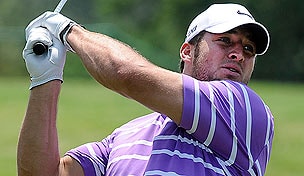 Getty Images
SHENZHEN, CHINA - NOVEMBER 27: Miguel Angel Jimenez of Spain looks on during round one of the Omega Mission Hills World Cup at the Mission Hills Resort on 27 November 2008 in Shenzhen, China. (Photo by Ian Walton/Getty Images)  -

It will not be Tee-bow Time at the AT&T Pebble Beach National Pro-Am.

Denver Broncos quarterback Tim Tebow will not play in the Clambake in two weeks, according to the Monterey Herald. Tournament director Steve Worthy said injuries Tebow sustained in the AFC Divisional Playoff game against the New England Patriots will preclude him from participating.

'Due to the injuries, it looks like he's a no-go,' Worthy said.

Tebow suffered injuries to the chest and ribs during the game against the Patriots, reportedly including torn rib cartilage and bruised lungs. The former Florida Gator would not have played in the AFC Championship game had the Broncos won.