Rory reaping the rewards of rest before Open 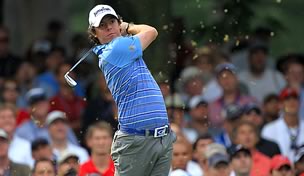 “He plays his best golf his first week back out,” said Chubby Chandler, the Northern Irishman’s manager with International Sports Management. “Some players need an event or two to dust off the rust but he’s at his best when he’s fresh.”

To Chandler’s point, McIlroy’s runner-up to start the year at the Abu Dhabi HSBC Golf Championship came after an extended break, as did his near-miss at The Masters and his maiden PGA Tour victory last year at the Wells Fargo Championship.

But it’s not as though McIlroy goes “couch potato” during his down time. During the break between the Memorial, his last start, and this week’s U.S. Open he visited a Unicef facility in Haiti, spent last Wednesday and Thursday prepping at Congressional, participated in a sponsor’s outing in New Jersey on Friday before sneaking away for a “working vacation” at venerable Pine Valley Golf Club where he tuned up for the season’s second major with two friendly matches against Chandler.

“I gave him plenty of confidence, let’s just say that,” smiled Chandler, who is a former European Tour player.