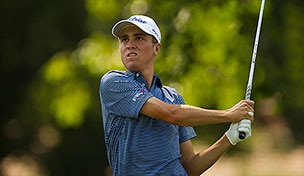 It was a matchup that could make Alabama fans cringe. Justin Thomas vs. Bobby Wyatt: teammates on the 2012 NCAA runner-up Crimson Tide golf team, the reigning NCAA Player of the Year and the second-team All-American, the Nos. 5- and 6-ranked amateurs in the world. It was a showdown that very well could have taken place in the finals, not just the Round of 16 at the U.S. Amateur.

Nevertheless, on Thursday at Cherry Hills, Thomas squandered a 2-up lead on the back nine, but won the 17th to knock off his teammate and good friend, 1 up. Thomas advanced to Friday’s quarterfinals, where he will face Oliver Goss.

Joked Thomas, a sophomore, “(Wyatt, a junior) is still above me in class, so I can’t make fun of him too much. He can still boss me around for a few more years until he gets out of college.”

Wyatt, who shot 9-under 132 in stroke-play qualifying to tie the tournament scoring record, built as much as a 2-up lead before losing Nos. 7, 8, 10 and 12. Thomas then proceeded to make three bogeys in four holes, sending the match back to all square. But on the par-5 17th, Wyatt flew his third shot over the green and made par, while Thomas drained a 15-foot birdie putt for the win. 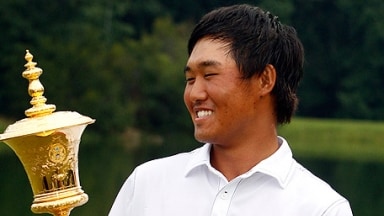