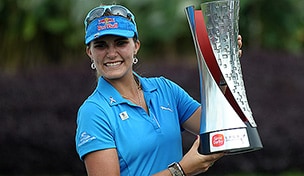 Through the first six months of the LPGA season, Lexi Thompson was in the midst of a solid but unspectacular campaign: 12 made cuts in 14 starts, with a pair of top-10 finishes but no result better than a tie for eighth.

Things changed quickly for the 18-year-old phenom, who capped three months of strong play with a win Sunday at the Sime Darby LPGA Malaysia.

Atop the leaderboard for much of the week in Malaysia, Thompson carded a 2-under 69 to finish four shots clear of Shanshan Feng, a winner one week ago in her native China. The win is the second of Thompson's fledgling career, as she also won the 2011 Navistar Classic as a 16-year-old amateur.

'Words can't even describe the feeling I have right now,' Thompson told reporters after the round, having largely taken control of the event with an 8-under 63 in Friday's second round.

The teenager's 2013 season largely turned around at the Marathon Classic in July, where Thompson tied for third. After a top-20 result at the CN Canadian Women's Open, the 18-year-old finished third at the season's final major, the Evian Championship, in her most recent start before Sunday's triumph.

The victory moves Thompson to eighth on the LPGA money list with $944,631 in 2013 earnings, while she is projected to ascend from No. 21 to No. 14 in the latest edition of the Rolex Rankings.