Three and out: Couples won't return as captain 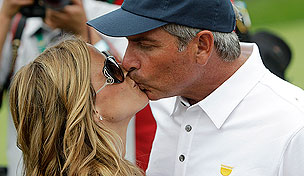 Getty Images
Standing outside of Chelsea Piers Driving Range in New York City, Win McMurry poses for a Gone With The Win cameraman.  -

DUBLIN, Ohio – Fred Couples is going out on top.

The United States captain led his Presidents Cup team to a third consecutive victory on Sunday, but maintained afterward that his days of serving in the role are now over.

'No, not as a captain,' Couples said. 'A three-peat is good enough for me.'

That doesn’t mean that Couples, whose teams won by a combined score of 57-45, wouldn’t consider being a part of another Presidents Cup.

“I'm not coming back – unless someone wants me as an assistant captain,” he said.

Couples deflected any credit to his players, much as he did on the first two occasions of leading the U.S. team to a win.

“It makes me look great to be involved in this, but you know, this is the third time I've had, as I said, all-star teams every single time. We've gotten nice leads. In a way, maybe they relax a little bit because they are all playing so well.”